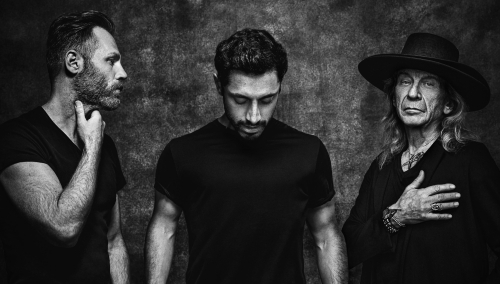 Darius Marder’s Sound of Metal went into 2019’s Toronto International Film Festival without a distributor. Now, a year-and-a-half on, it’s a six-time Oscar nominee and perhaps the most hard-fought of all of this year’s crop of Best Picture candidates. Joe Utichi meets Marder and stars Riz Ahmed and Paul Raci to take stock of a film that transformed its key players in ways they hadn’t expected.

They say Oscar loves a narrative, and they don’t come much more inspiring than Sound of Metal’s. Even before he got his debut feature to set, Darius Marder spent more than a decade honing his tale about a heavy metal drummer and recovering addict who loses his hearing, butting up against the many hard realities of filmmaking that told him a movie like this could not work. As he did it, he learned more and more about deaf culture, and heard moving stories about people pursuing recovery in dedicated deaf sober houses. In Riz Ahmed, he found an actor willing to immerse so fully into his lead role that he would learn to play the drums and become fluent in American Sign Language. And in Paul Raci, he found a man whose own life story reflected almost directly on the character he and his brother Abraham had written into this script.

And so, as he kept facing reasons why it shouldn’t work, it became increasingly clear to him that it had to work. With the help of producers who saw the fire burning in Marder’s belly—Sacha Ben Harroche and Bert Hamelinck of Caviar, who had made a name producing ‘shouldn’t work’ films like Chloe Zhao’s The Rider—he got the film to set and presided over a production that would have a profound effect on everyone taking part.

That might have been the end of the story. Even with the film in the can, it went into its premiere at the Toronto International Film Festival in 2019 without a distributor. But the spirit and impact of Sound of Metal’s tale led to a bidding war that resulted in Amazon Studios taking US distribution rights. After the ‘odyssey’—Marder’s word—that got the film there, even the global pandemic that subsequently disrupted the film’s release plans might have felt like a trifling concern. After all, it hasn’t stopped the power of Sound of Metal working on audiences and awards voters the world over.

Now, as Marder and his cast and crew make plans for an Oscar night that will reunite them for the first time since TIFF in 2019, he sits down for a moment of reflection with Ahmed and Raci, and a deep dive into the transformative experience of making Sound of Metal.

DEADLINE: This film premiered in a whole other reality, at the Toronto Film Festival in 2019. It has been on quite the journey since, but how long did it take even to get it to that point?

DARIUS MARDER: It was a real odyssey trying to get this made [laughs]. It’s been a lot of years, but I think if I went back six or seven years, to the point where I was actually taking a script and thinking about getting it financed and made, what I had to realize the hard way is that the Hollywood model is that some producers back-pocket projects. And as a director, you don’t really know that’s happening, or I didn’t realize it was happening because I hadn’t been through it before.

What I didn’t fully grasp before I began is how impossible it is to make a first movie. Not a lot of people realize that it’s easier to finance a $100 million blockbuster, because with a film like this, there are three actors in the world who can finance your movie. So, before you’ve even started, you’ve narrowed the conversation down to something that isn’t a very creative conversation. You hav e producers that are used to saying, “That’s an interesting project, I’ll put it in my back pocket,” and if you happen to get one of those three actors, they’re all in. In the meantime, though, they’ll just let the director fly all over the world meeting actors and pay for their meals and hope he lands something.

RIZ AHMED: Hey, that’s bullshit. I offered to pay for the meal.

MARDER: Wait, you’re getting ahead. Because by the time I got to you, I actually had producers that would help me out by paying for the meals. That’s true.

AHMED: By the time you got to me you were broke and I had to pay for the meal.

MARDER: I also talked to the restaurant ahead of time about getting you the limited menu.

AHMED: The kid’s menu. It was just chicken nuggets and broccoli.

MARDER: It was a move I honed over the years [laughs]. [More at Source]