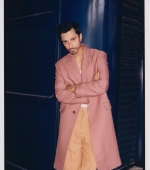 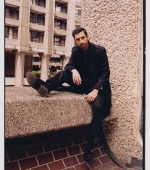 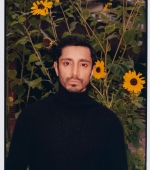 On 1 April 2020, nine days into the first Covid lockdown, Rizwan Ahmed was staring back at me over a WhatsApp video call. Across subsequent months, surrealism would become the new normal for us all. But for me personally this was where the madness began: a candid conversation with a star whose voice I first discovered nearly 15 years ago, as a wide-eyed teenager picking up RWD magazine. Riz MC was featured in the “About To Blow” talent-spotting section.

“Sometimes people talk about growth as something that you don’t invite, right? Sometimes growth just slaps you in the face. And I feel like that’s what it was for me,” Ahmed poses now, 18 months on, reflecting on his personal journey since the start of the pandemic. He is wearing a striped green collarless shirt and glasses. We’re poolside, facing each other across a small table, eating brunch beneath a clear blue West London sky on the roof of White City House. Ahmed’s answers are philosophically demanding but therefore rewarding, like sitting with your favourite professor during office hours. Yet between thoughts he pauses seamlessly to make in-the-moment observations: excitement at the colourful dragonfly that zips past us; polite inquisitiveness about whether his vegetarian breakfast will come with avocado. “I was pedalling so hard that sometimes I didn’t look up to see where I was heading. So that enforced me to stop, sit with myself, think about what really matters… It was difficult in many ways, but I am also strangely grateful for it. It gave me clarity.” After everything, he seems happy to be here.

In the spring of 2020, Ahmed’s album, The Long Goodbye, and its accompanying short film were released to critical acclaim. Months later came the UK release of Mogul Mowgli, a collaboration between Pulse Films and Ahmed’s production company, Left Handed Films. The feature film, which he cowrote with his friend director Bassam Tariq, drawing from their life experiences, traces the paralysing demise of rapper Zed as he navigates illness and a premature career halt. “It’s basically a pandemic movie: a workaholic gets hit with a health crisis; his life is thrown into a lockdown. He has to sit with himself, reassess what really matters,” Ahmed explains, noting the film’s atmospheric parallels with the timing of the real world. “I always find the making of a film, the telling of a story and the story itself, end up mirroring each other. Always. It’s like the lesson you need to learn, in your life, in that moment, the character teaches it to you. The story is taking you on that journey that you need to go on.” [More at Source]