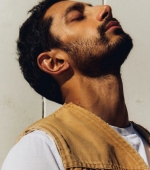 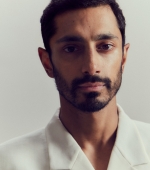 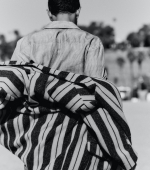 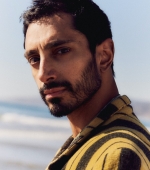 River Runs Deep: Riz Ahmed Interviewed
“I’m proud of all the work I’ve done, but’s it’s also important we evolve…”
Riz Ahmed has emerged as an unfiltered voice for the marginalised and minoritized, with totemic performances across music and film. For years, Ahmed has embraced the gift and burden of representation.

Now, he’s ready to hone in on the micro.

There’s a protracted scene at the end of The Long Goodbye short film where Riz Ahmed glowers directly into the viewer’s gaze. In spoken-word, he recites the lyrics from ‘Where You From?’; his bloodied mien a mesh of fury and anguish, eyes transmitting a hollow longing.

In preceding scenes, Ahmed and his family are partaking in the usual “ronak” – the frenzy – that characterises a typical day in a Desi household; it’s a projection of warmth, colours, aroma and familial noise. Whilst a nagging sense of foreboding pulses throughout, the violent melodrama that supervenes remains etched in the psyche long after initial viewing. “With the short film, I was asking how can you understand this wider social and political fuckery through a very first-person, subjective point of view? How can I portray this vicious invasion of our private space, this world breaking down through a portrait of one character breaking down?” Ahmed says.

Clash catches Riz Ahmed over Zoom on the promo trail; he’s currently in LA filming for the sci-fi thriller, Invasion. Our transatlantic conversation coalesces into dialled-in observations, unexpected analogies and whimsical detours through a storied career. It can feel like a breathless jaunt as Ahmed stuns you with commentary that reads like a thesis: We cover artists that soundtracked his lockdown – Tirzah, J Hus, Koffee and Jai Paul, to name a few – global politics, art over commerce, the spectre of isolation for an actor who lives out of his suitcase. Ahmed commands your attention, always. There’s no ego, no sense of elevated superiority – just a convivial demeanour.

Ahmed recalls his own history, weaving a binding thread through a career that has for the most part, abjured a mainstream blueprint. Born in Wembley, London, to an upwardly-mobile family who emigrated to the U.K from Karachi, Pakistan in the 1970s, Ahmed remains tethered to his heritage. His family still resides in London; a personal and community-based sanctum he takes with him wherever he goes. “London is home; culturally, and in terms of its demographic mix. It is one of the most colourful cities in the world,” he says with pride.

Still, Ahmed, like many children of the diaspora, is bound by a constant state of the ephemeral. A sense of unbelonging shrouds us in perpetuity – we become one with this ambiguity, and it inscribes our being like a tattoo. Ahmed’s work reconnoitres that sticky grey area, avoiding binary answers for multifarious questions. “We’re people who code-switch, we live between cultures to navigate our daily lives, implicitly and explicitly,” he shifts in his seat, “It’s impossible to bring all of yourself to this interview, this meeting room, this workplace or even a romantic relationship – you have to leave a part of yourself at the door,” he explains. [more at source]