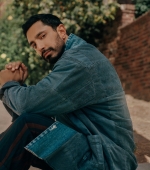 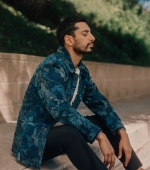 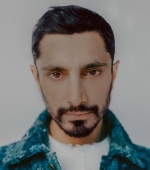 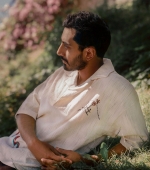 In his latest film, Sound of Metal – in which Julie Andrews teaches some Austrian children to sing Iron Maiden (Ed: fact check?) – Riz Ahmed plays a workaholic musician, a drummer, who suddenly goes deaf on tour and joins a deaf community to learn how to adjust to his new life. The first step in this process is just sitting alone in a room and writing down his thoughts. And it’s hardest step of all.

“It’s a kind of purgatory,” says Ahmed, a workaholic artist himself. “A bit like lockdown really, so I think people will relate. These last months, a lot of us were forced to turn inward, and it’s hard when you’re used to spinning a lot of different plates.”

We’re at the James Hotel in Hollywood. He’s in town to shoot a sci fi movie, Invasion, starring Rory Cochrane and Octavia Spencer, about a father on the run with his two sons, to escape an alien threat. So, at least his lockdown his over, and movies are back in production – a semblance of normality. But earlier in the pandemic, he was stuck at home like so many of us, reflecting on What It All Means – the cracks Covid has exposed in terms of the climate, racial justice and so on, as well as the persistent need he felt to remain productive, “just to have a sense of self-worth, because that’s what we’ve been taught by this broken capitalist system.” These are things Riz can speak at length about, and in full paragraphs, citing statistics. There’s an intensity about him. He’s engaged.

But he’s also upbeat. The world may be falling apart, but for Riz, the artist, things are coming together quite nicely. “There’ something quite spurring about shit falling apart, in terms of clarifying your priorities,” he says. “And I feel really positive about where I’m at creatively. I’m working from a much more personal place, and I feel like I’m finding my voice, my language. I’m doing what I want to do now, rather than what someone else wants.”

At 38, his resume is as full and varied as any actor of his generation. A string of acclaimed independent movies (Four Lions, Road to Guantanamo, Nightcrawler), a few big studio films (Bourne, Venom, Star Wars), an Emmy winning television performance (The Night Of), and a rap career for which he’s less known, but which has been as rewarding as anything else. “My music’s not commercial,” he says, “but I know the ways it’s touched people, the depth of connection people have had. It depends on how you define success.”

In this particular period of flourishing, there are three pieces of work – two movies and an album. Sound of Metal, a small and necessarily quiet feature, which required seven months of learning the drums and learning sign language – “I never prepared so intensely for a film before.” The work was worth it though, earning him a Golden Globe nomination and Oscar chatter. It follows 2020’s Mogul Mowgli, a much louder and more personal film, electric in its energy and confrontation, that Riz co-wrote with first time director Bassam Tariq, in which he played another stricken musician, a rapper named Zed who suffers an autoimmune disorder.

It’s not easy to tell Zed and Riz apart. Like Riz, Zed is a British-Pakistani rapper – his music is taken from Riz’s latest album The Long Goodbye – who’s preoccupied with themes such as identity, ancestry, and art, an immigrant’s yearning to discover who he really is. And like Zed, Riz also suffered a health issue in recent years, which he won’t specify, but it was grave enough to serve as a wake-up call. “I had my personal little corona,” he says. “It forced me to sit with myself, think of what really matters and… just face my mortality, basically.” [More at Source]