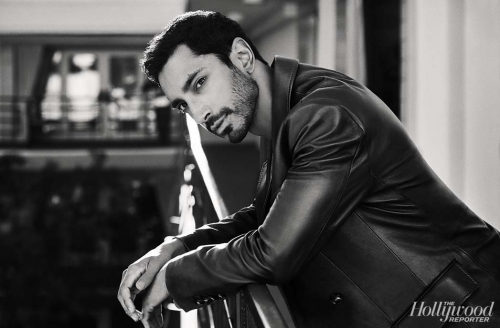 With his buzzy performance in ‘Sound of Metal’ — which required him to learn sign language and drumming — plus a new wife and a booming company, the soft-spoken actor and rapper is having his loudest year yet.
Back in summer 2018, Riz Ahmed was preparing for a classroom scene for his latest film, Sound of Metal, and his American Sign Language coach, Jeremy Lee Stone, was becoming increasingly annoyed. Stone had worked with the actor for the better part of a year, teaching him ASL for the role of Ruben, a rock drummer whose life begins to spiral out of control when he loses his hearing. This, however, was his first day on the Massachusetts set, and he hadn’t seen his star pupil in months. Stone made a “voices off” sign, and Ahmed was expected to reciprocate with an identical sign. But Ahmed sat defiantly, refusing to sign, and “it boiled my blood,” Stone recalls. After all, the actor was well beyond fluent in ASL by that point. And then it hit Stone. Ruben the character was not yet fluent. “I realized, in that moment, I’m not speaking to Riz,” Stone recalls. “There was no Riz. He was fully Ruben in that moment.”

Ahmed’s deeply immersive performance in Sound of Metal, which Amazon debuted Nov. 20, has garnered some of the best reviews of a trailblazing career that has brought the British-born phenom American stardom — if not quite universal recognition: On a sunny January day in Santa Monica’s Palisades Park, as the 38-year-old actor is logging on to a video call with The Hollywood Reporter, a stranger calls out to him. “Is that Hardy?” she asks. Ahmed is confused. “Your name is Hardy?” the woman presses. “No it’s not, no, no sorry,” he says, looking puzzled before switching his focus back to the call. “I wonder if she meant Tom Hardy? Or Laurel and Hardy? Or am I a Hadid?”

Since 2016, Ahmed has flirted with a don’t-confuse-me-with-Tom-Hardy kind of celebrity by starring in the Star Wars stand-alone Rogue One, a $1 billion-plus earner that became that year’s second-highest-grossing film domestically, followed by Spider-Man spinoff Venom (which starred Hardy) two years later. In between, he made history as the first South Asian man to win an acting Emmy for his role in HBO’s The Night Of, besting Robert De Niro, Benedict Cumberbatch, Ewan McGregor, Geoffrey Rush and his Night Of co-star John Turturro in the outstanding lead actor in a limited series or movie category.

But instead of harnessing that momentum and becoming a tentpole-only player, Ahmed signed on for the riskiest role of his career with Sound of Metal, a film that would require nearly a year of intense preparation with Stone as well as a drum instructor and a trainer. Underscoring the gamble, the film paired him with a first-time narrative feature director in Darius Marder, who had been trying to get the project off the ground for nearly a decade.

” ‘Why are you doing this when you could go off and get paid, finally?’ ” Ahmed remembers asking himself. “There was an opportunity to do bigger, more commercial projects and make money and buy a home and all these things. But I thought, ‘Here’s your chance.’ My gut feeling about it was so strong. And for whatever reason, I felt really hungry for something like that, to go all in and just fucking go there.” [More at Source]