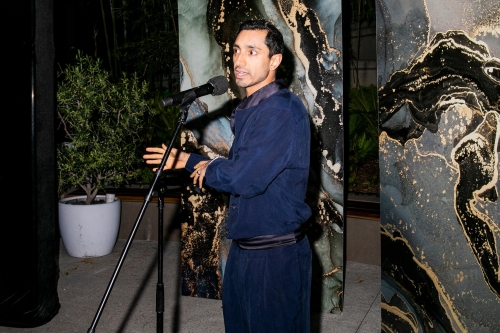 The dirty secret about film industry parties is that they’re rarely fun. Hardly anyone feels like they’re in with the in-crowd. There’s a lot of posturing, peacocking and busying oneself with one’s phone.

The opposite was true at a party to celebrate the achievements of South Asians in this year’s Oscars race on Wednesday night.

Three weeks ago, Maneesh K. Goyal, a New York restaurateur, was talking with Anjula Acharia, who is Priyanka Chopra Jonas’s manager, and Shruti Ganguly, a film producer. “We realized there were 10 Oscar nominees of South Asian descent this year,” Mr. Goyal said. “My immediate response: ‘We should throw a party.’”

Ms. Chopra Jonas signed on as a host, and so did Mindy Kaling, Kumail Nanjiani and Bela Bajaria, the head of global TV at Netflix. The United Talent Agency offered its Beverly Hills offices.

No beige carpeting here: Around 5 p.m., guests filtered into an airy courtyard with a gazebo decked out in gold streamers. They were proud to be in one another’s presence. “To have this depth of talent, to have enough nominees to throw a party, this was not the case five years ago,” Ms. Bajaria said. “It’s not just writers, directors and on-screen talent. There are agents, assistants and executives” — like herself — “who have green-light authority.” [More at Source]